The other day I started my HullPixelBot journey (http://goparker.com/post/2018-05-25-plastic-parts-printed/) and I have made some progress since then. 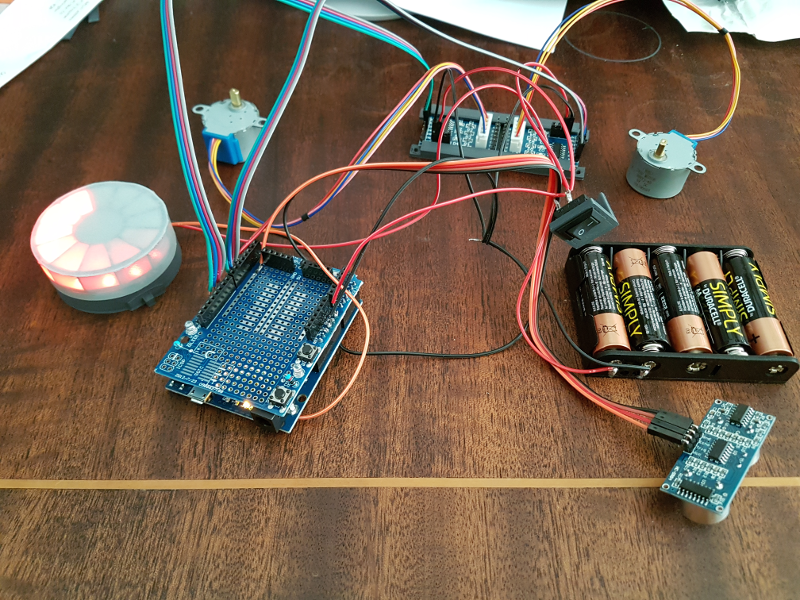 So I did a spot of soldering and wired everything together. That was a fairly straightforward process except that because I didn’t have any male type connectors (only female-female) it was a bit more fiddly than it needed to be as I was soldering directly on to pins on the Arduino board. To be precise, I was actually soldering on to the shield board as I just happened to have one and it has little pins exposed on the outside of the board. 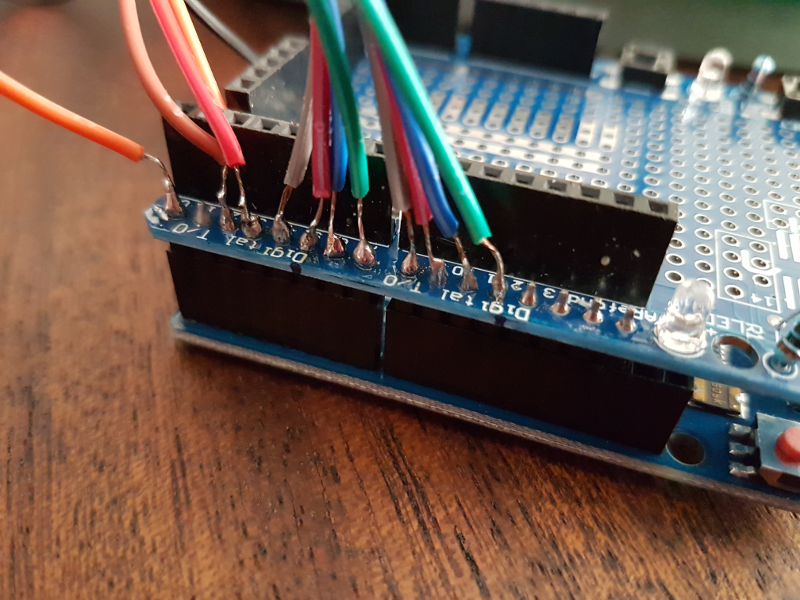 This is not something that I particularly recommend as I am pretty sure that they will be more fragile connections than with proper connector. However, I was impatient to test that all the electronic parts were working.

An observation that I made that seems to be the case is that there is sufficient power from the USB connection to power everything. So whilst you are testing and deploying the programme code you can save your batteries.

With the PixelBot lying disembowelled until I can fully assemble it in its chassis, the fine tuning of the motor code was pretty boring. So I skipped it for now and raced on to put on a light show. It uses a 12 pixel rgb NeoPixel ring.

I installed the NeoPixel library (https://learn.adafruit.com/adafruit-neopixel-uberguide/arduino-library-installation) and started by deploying one of the example sketches. I picked the RGBWstrandtest because it had rgb in the name. I had to make sure that the data pin was set to the right one (zero in my case) and change the number of leds that it was expecting. And what a lovely light show it made. I was pleased because the pixel ring was obviously working. The next step was to start fiddling with the sample code to make sure that I understood what it was doing.

I started by trying to get a particular pixel to light up.

Perfect. The pixel that I expected to be at index 0 (the first parameter of setPixelColor) lit up red (the colour that I expected from RGB(255, 0, 0), RGB(red, green, blue)). So let’s try the next pixel over by increasing the index by one.

Wat? The next pixel over is lit up (Hooray!) but it is blue (Haroo…). Turns out it was a pretty simple mistake.

When you declare your NeoPixel strip (in my case it is a ring, but I haven’t renamed the variable yet) you specify the encoding that you will be using to communicate with the pixels.

This is the NEO_GRBW + NEO_KHZ800 bit above. The mistake is that that little bit of code that I inherited from the sample file that I chose with RGB in the name refers to a different kind of pixel that has a pure white component to it (the W bit of RGBW). So by simply removing the W from that declaration, it all worked as expected.

Now on to greater things. I was armed with the ability to light pixels so I wanted to come up with a custom animation (i.e. one that was different from the sample code). The effect that I went for (that should be shown in the animated gif at the top of the page) was to have a leading pixel whizzing around the ring with a trail of faded pixels behind.

In order to achieve this I needed to be able to set an individual pixel’s brightness. When you set the colour of a pixel you give it an RGB value where each of the Red, Green, and Blue parts can take a value between 0 and 255. A value of zero is completely off and 255 is completely on. The combination of the different intensities of the three colours allows you to create lots of different shades.

I also wanted a way to do the same, but for a ‘merged’ colour like the one that is returned by the strip.Color method which returns a uint32_t value. In order to do this it is necessary to split the merged colour in to its RGB components. That requires a bit shift.

The bit shift (done using the » operator) will shift all the bits of the variable to the right by the number of spaces that you specify.

I can then call this with the colour black (all off).

The reason that I need this for the tail effect is that all of the pixels that are not part of the tail should be turned off.

And finally we have the method showTail itself. It initialises a brightness value to full brightness. This is what will be used for the first pixel. Then for every pixel after it, reduce the brightness by half. The other important method being called is the correctIndex method that just makes sure that the ledIndex being generated remains in range and ‘wraps’ around to complete the loop of the pixel ring.

I am looking forward to assembling the PixelBot next. I ought to give it a name. I will think of something.