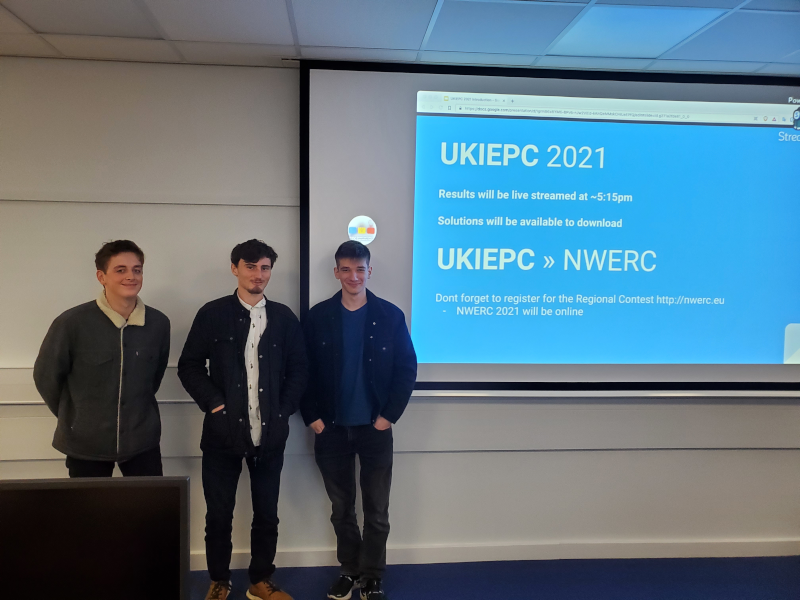 This Saturday, just passed, we once again hosted a local site for the UK and Ireland Programming Competition (http://ukiepc.info/2021/).

We had one valiant team enter the fray.

By coincidence, it was also a University Open Day and, as we had set up camp in the shiniest of shiny new labs, I got to give a number of short talks to the many tour groups about what the student team was doing before expanding on the various fun extra-curricular activities that we put on throughout the year. Hopefully it helped tip the balance in convincing them to join us in Hull next year.

So, back to the competition. It was great to put some faces to names that stood out from last year and the Object Oriented module that I taught on. It was probably no coincidence that they were names that I recognised from the Katt-is-trophy leaderboards from their time on that module. Kattis (https://open.kattis.com) hosts many, many algorithm puzzles in a very similar setup to those running in the UKIEPC. I used it to encourage regular programming practice by having a rolling leaderboard that rewarded the most improved since the previous week (so as not to have runnaway winners).

Our single team, made up of second year students, put in a sterling effort and placed 93rd out of around 130 teams. They seem determined to practice a bit more during the coming year on Kattis problems and return again next year for more glory!